Ice hockey brings people of different
backgrouds and generations together in a meaningful and at any time exciting leisure activity. At Totonka about 80 players from 10 nations (Bulgaria, Germany, Italy, Kazakhstan, Canada, Austria, Russia, Slovakia, Czech Republic and Hungary) are playing in 3 teams (Auto Eisner Elite League, Auto One 3rd League, Auto Eisner 4th League) and at the age of 17 to 45 years.

Vienna University Totonka was founded in 1995 by students and is now one of the largest ice hockey clubs in Vienna. With 14 championship titles Totonka is also the most successful amateur ice hockey club in Vienna. The majority of players are students or academics. Many players have also passed through the junior division of EBEL clubs (Bolzano, Graz, Klagenfurt, Linz, Salzburg, Vienna). Internationality is an important part of Totonka. From the beginning, players from abroad were part of Totonka. While at the beginning there were still Canadian UN staff chasing after the disc at Totonka, today the Uni team is the first starting point for hockey-playing students coming to Vienna. It is important in our club that the players not only come to play ice hockey, but that they are integrated into life in Vienna. It starts with a shared leisure time (baseball, football, concerts, parties, etc.), including assistance with finding a place to live, orientation at the university and authorities, placement of internships or holiday jobs. Many players stay in Vienna after their studies. And those who go back home or go to other countries for work stay in contact with us. The club motto is “Once Totonka – always Totonka”. So there are u.a. Totonka contacts from North America via Singapore to Japan.

Totonka also participates in international tournaments. For several years Totonka plays a Winter Classic against the university team from Oxford in January now. The Oxford Blues are the second oldest ice hockey club in the world (including several Spenglercup wins). The game always takes place in front of historical backdrop at Heumarkt (Wiener Eislaufverein). Furthermore there was already a showdown with the Czech University Master Zlin in front of 3,000 spectators in Zlin or the University team of Aachen. We also regularly play a university tournament in Prague or Znajm. LAst but not least there are talks about participation in the European University Hockey League (http://www.euhl.eu/).

If you now are interested in having fun with the buffaloes on ice, write us a short mail to vorstand@totonka.at 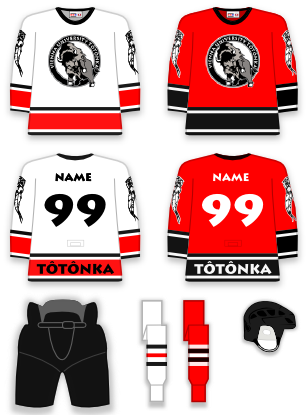